ROHMANN is a leading German manufacturer of eddy current testing equipment and systems for non-destructive materials testing (NDT). For more than 40 years we have been developing, producing and marketing our technology as a medium-sized family owned company based in Frankenthal, Germany. Today, our testing equipment and systems are used worldwide in crack, heat treatment, material mix-up and grinding burn testing. We are proud to count leading companies from the aviation, automotive, rail, energy (power plants, renewable energies) and steel industries among our esteemed customers.

Research is the investment in our future.

We develop smart solutions for new tasks and innovative solutions for existing tasks – the results are outstanding reliability, improved performance, higher speed and cost-effectiveness of your test equipment. We focus on interdisciplinary cooperation with leading laboratories, technology partners and departments of applied research.

Customer satisfaction is our key to success.
Our strongest motivation is the satisfaction of our clients. A complete understanding of specific customer needs and tailor-made products and services are a part of our philosophy. That is why we always seek dialogue and request “feedback”. Our aim is to meet the increasing customer expectations to their fullest satisfaction through permanent product adaptations and perfect service.

Quality is the hallmark of our work.
Our efficient quality management system has been certified according to DIN EN 9001 since 1999. This enables us to meet the highest international standards. We focus on the continuous improvement of our employees’ qualifications, the further development of all quality processes and the permanent optimisation of all our technical facilities.

Our story is our experience

We are always on the lookout for talented and ambitious employees who bring a breath of fresh air, new perspectives and innovative ideas. Become part of the ROHMANN family and discover opportunities and new challenges with us. On this page we inform you about ROHMANN and our current vacancies. 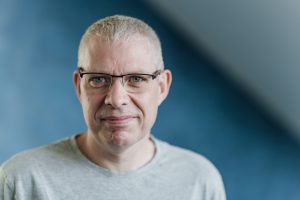 We are a team of very creative and highly specialized people. We have learned to not only comprehend things, but above all to question them with the aim of developing software solutions for every project and every challenge. Our software specialists work with a very advanced product. Our challenge is to meet the individual product requirements of our customers again and again. 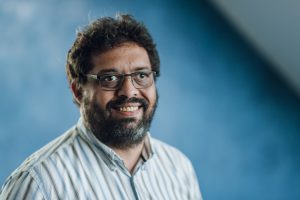 As a family-owned company we work in small teams. Each individual is in charge right from the start and, according to his or her expertise, is responsible for a wide range of tasks. Therefore, the learning curve is steep for everyone in the team. We always work cross-departementally and benefit from the most modern hardware and software – but most of all from each other. Our R&D department is the heart of ROHMANN. Working with us means always facing new challenges in eddy current testing. 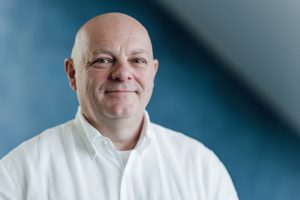 I have been working in sales at Rohmann for more than 15 years and have expanded my area of responsibility over the years. At ROHMANN there is no working according to standard scheme, because no ( testing ) task is like another. That is the reason why we often develop customer-specific solutions. Each of these technical challenges is also a personal opportunity for me to grow professionally. Working in an international business environment I find very inspiring. We offer our test equipment, systems and special solutions worldwide and work closely with our international sales partners on all continents.

ROHMANN in the press

What’s new at ROHMANN? Would you like to know more about us, our products and our company? Then we welcome you to inform yourself about the latest press reports and press releases of Rohmann GmbH.

Specialists for special tasks
When a six-cylinder engine is installed at BMW, the materials used for it have most likely been tested with a device from Frankenthal. Rohmann GmbH is one of Germany's leading companies in the field of non-destructive material testing. The company, which is located in the Gewerbepark Nord, is celebrating its 40th anniversary and provides an insight into everyday working life.
Author: Jörg Schmihing Source: Die Rheinpfalz
From Frankenthal to the world
They are one the world's leading manufacturers of Equipment, facilities and systems for non-destructive material testing using eddy current methods: Rohmann GmbH with its headquarters in Frankenthal. This year it is celebrating its 40th anniversary - in June it will be celebrated. Bolts of all sizes and shapes, small balls and pins, tubes, camshafts, entire engine blocks, railway tracks, but also joint prostheses can be seen in several showcases in the foyer of the company headquarters, where all products for which Rohmann GmbH offers testing equipment are on display.
Source: Wirtschaftsmagazin IHK Pfalz
Download (PDF)
Innovation Award Minister Lemke honours Rohmann
Frankenthaler Rohmann GmbH has received the Rhineland-Palatinate Innovation Award in the "Company" category for an eddy current testing device for detecting material fatigue in railway rails.
Source: Die Rheinpfalz
Mobile rail processing using rotary planer on railway tracks and at switches
However, efficiency in switch processing also results from joint preliminary acceptance of the switches by the customer and contractor. This includes determining the geometric conditions and checking the material-side damage to the switch, determining the processing lengths A, B and C after the beginning and end of the switch, deriving the construction requirements and determining the processing time separately for main and side track. Proof of the HC-free condition of machined rails Similar to the grinding and milling machines and the planer, the D-HOB 2500 is also currently equipped with eddy current testing technology. The test system developed by the companies Rohmann GmbH, Frankenthal and Mevert Maschinenbau GmbH, Lauenhagen with the cooperation of Schweerbau consists of - one sensor carrier per rail, - two test sensors per sensor carrier, - an industrial eddy current tester type Elotest PL500, - a data server PC, - a terminal PC with visualization software and printer. The sensor carriers can be lowered and raised during the machining process. They position themselves automatically, are guided along the running edge and are suitable for soft ground. The inspection is carried out in the tracks 9.2 mm and 17.9 mm from the running edge. The maximum test speed is 20 km/h. The testing devices are calibrated on workdays according to customer specifications.
Author: Dr.-Ing. Dieter Hartleben Source: EI Eisenbahningenieur
Download (PDF)
Non-destructive testing with eddy current – parts and components of turbochargers
Parts and components of turbochargers are exposed to the highest loads during operation. The turbocharged engines used today are dependent on the operation of high-precision and reliable turbocharging technology at low displacement and high speeds.  A component that is subject to particularly high stress is the so-called compressor wheel (Fig. 1, red frame). One of the most highly stressed zones of these compressor wheels is in the area of the central bore, which connects the wheel with the shaft of the turbocharger (Fig. 2; red frame). After a damage case in which a breakage of the wheel in this critical area led to the failure of the turbocharger, a test procedure using eddy current technology was developed in cooperation with Rohmann GmbH. The publication of the article was made possible by close cooperation with Mrs. Dipl.-Ing. Angela Au (Head of Materials Engineering; PRÄWEST) and Mr. Dipl.-Wi. Stephan Reich (Head of Quality Assurance; PRAE-TURBO GmbH & Co.KG) 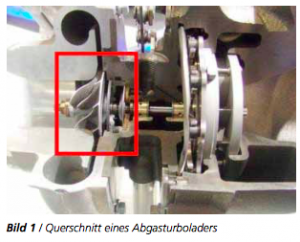 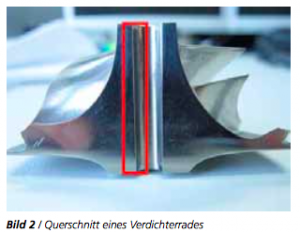 Author: Alexander Maltry Source: IN-Cert
Download (PDF)
Fascinating eddy current testing tasks and solutions
The company Rohmann GmbH had invited both working groups to their new headquarters in Frankenthal for the 299th meeting of the Mannheim/Ludwigshafen working group and the 246th meeting of the Frankfurt working group. The 37 participants were warmly welcomed in the company building, which was newly constructed in 2009. In the introductory lecture an innovative leading and worldwide represented company was presented, which was founded in 1977 by Jürgen Rohmann with two employees and is today managed by his daughter Petra Rohmann in second generation. Research, development and production of eddy current testing devices for manual testing up to tailor-made testing systems for serial testing are the tasks of the company.
Author: Uwe Salecker Source: ZfP Zeitung
Download (PDF)
Non-destructive material testing with eddy current
Rohmann GmbH in Frankenthal stands for more than three decades of experience in non-destructive materials testing, specialization in eddy current testing technology and as a supplier of trend-setting equipment technology. After moving into an architectual innovative new building in January 2009, the family-owned company has again delivered several fully automated robot testing systems to major international customers in the aviation industry.
Source: Wirtschaftsmagazin IHK Pfalz
Download (PDF)
Digital eddy current testing ten times faster
Eddy current methods are not always fast enough for high speed non-destructive testing applications. Digital instrumentation technology from Rohmann, Frankenthal, Germany, is capable of breaking the previous speed limit. As a result, high-resolution testing at the highest speeds is now possible with just one single device.
Download (PDF)
Rohmann moves in the Gewerbepark Nord
Frankenthal-based Rohmann GmbH, manufacturer of eddy current testing equipment and systems, is about to move: In October 2008, the company, which employs 65 people, plans to move its headquarters from Rudolf-Diesel-Strasse to a new building in the Gewerbepark Nord. Managing partner Jürgen Rohmann estimates the cost of the investment (including the purchase of land) at 8 million euros. The business with eddy current testing technology has developed very positively, especially in recent years. In 2007, the highly profitable family company reported a profit after tax of 1.5 million euros on sales of around 8 million euros; 2008 is expected to be a similar success. Rohmann considers itself one of the leading manufacturers in the industry with its special technology, which is in great demand, particularly in aviation and among car manufacturers for the testing of materials.
Source: Die Rheinpfalz
Download (PDF)
Rail inspection at speed 200 km/h
Frankenthal-based Rohmann GmbH plans to market a new analysis technology worldwide and has identified a large market for this technology. The company's CEO Jürgen Rohmann announced that the company will initially equip a test train of the Bahn AG with the new so-called scor technology. The company will then market the method worldwide. The durability of tracks is estimated at 30 to 50 years; the demand for reliable testing technology is high. "Non-destructive materials testing" is what Rohmann's equipment makes possible. Eddy current testing technology can be used to examine all electrically conductive and at the same time magnetized materials. For this purpose, the test object is exposed to the effect of an electromagnetic alternating field.
Download (PDF)
Flight Safety “Made in Frankenthal”, above and below the clouds
"Above the clouds, freedom must be boundless." To ensure that this feeling, poetically formulated by Reinhard Mey, can be enjoyed carefree by passengers all over the world, a Frankenthal-based company has played a major role in the process. Rohmann GmbH manufactures eddy current testing equipment and systems that are used to test the functionality of aircraft parts, as well as other components. Well-known airlines all over the world now adorn the Rohmann customer list. The company is also renowned as a developer. Funded by the German government, Rohmann has been entrusted with the overall responsibility for the project "Non-destructive testing of aircraft parts using SQUID". SQUIDs are the most sensitive magnetic sensors available in the world. Renowned partners in the "SQUID" project are the Jülich Research Centre, the University of Gießen, the Institute of Air and Refrigeration Engineering Dresden, Lufthansa Technik AG and Daimler-Benz Aerospace Airbus GmbH.
Source: Die Rheinpfalz
Download (PDF)
learn more
load more